There are 26 sheets of EXTRA quality Frigate USS Bonhomme Richard ship model plans. The set includes ALL the needed details to start modeling. This is a wonderful solution for ship modelers of all levels. All Ship Model Club Members get unlimited technical support in model ship building.

The first USS Bonhomme Richard, formerly Duc de Duras, was a frigate in the Continental Navy. She was originally an East Indiaman, a merchant ship built in France for the French East India Company in 1765, for service between France and the Orient. She was placed at the disposal of John Paul Jones on February 4, 1779, by King Louis XVI of France as a result of a loan to the United States by French shipping magnate, Jacques-Donatien Le Ray. Jones renamed her Bonhomme Richard, the French language equivalent of “Poor Richard,” in honor of Benjamin Franklin’s almanac called Poor Richard’s Almanac.

On June 19, 1779, Bonhomme Richard sailed from Lorient accompanied by Alliance, Pallas, Vengeance, and Cerf with troop transports and merchant vessels under convoy to Bordeaux and to cruise against the British in the Bay of Biscay. Forced to return to port for repair, the squadron sailed again August 14, 1779. Going northwest around the west coast of the British Isles into the North Sea and then down the east coast the squadron took 16 merchant vessels as prizes.

On September 23, 1779, they encountered the Baltic Fleet of 41 sail under convoy of HMS Serapis (44) and Countess of Scarborough (22) near Flamborough Head. After 18:00 Bonhomme Richard engaged Serapis and a bitter engagement ensued during the next four hours that cost the lives of nearly half the American and British crews. At first, a British victory seemed inevitable as the more heavily armed Serapis used its superior firepower to rake Bonhomme Richard with devastating effect, killing Americans by the score. However, the Americans eventually pulled along side and lashed the two ships together. An attempt by the Americans to board Serapis was repulsed, as was an attempt by the British to board Bonhomme Richard. Finally, an American party under command of Nathaniel Fanning seized control of the enemy tops and used this position to clear the deck below with grenades, mortars and gunfire, causing Serapis to strike its colors. Bonhomme Richard, shattered, on fire, and leaking badly defied all efforts to save her and sank at 11:00 on September 25, 1779. John Paul Jones sailed the captured Serapis to the United Provinces for repairs.

Though Bonhomme Richard sank subsequent to the battle, the outcome of the battle convinced the French crown of the wisdom of backing the colonies in their fight to separate from British authority. The defeat of Serapis, no less in home waters, stung the British admiralty.

Bonhomme Richard’s final resting location is the subject of much speculation. A number of efforts have been conducted to locate the wreck. As of 2005, these efforts have been unsuccessful. The location of the wreck is presumed to be Flamborough Head in Yorkshire, a headland near where her final battle took place in approximately 180 feet of water. The number of other wrecks in the area and a century of fishing trawling operations have complicated all searches. 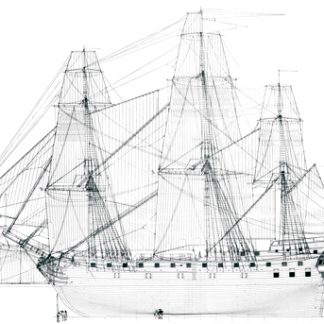