History of the ship
At the start of the 17th century the squadrons of the Dutch fleet were reinforced with merchant ships adapted for battle in earlier conflicts. The introduction of the line-tactic increased the demand for ships with a great deal of manoeuvrability, speed and crew experience. In 1653 the Dutch government decided to build 60 ships, and a 10 years later they placed another order for 60 more. The flagship of the republic, De Zeven Provinciën, was fitted with 96 guns, for comparison, the British HMS Victory build over a century later had only 8 guns more. 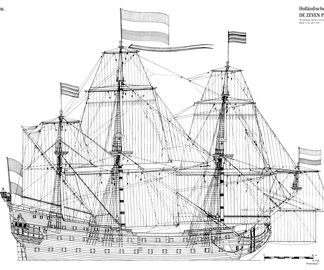