USS Washington (BB-56), the second of just two North Carolina-class battleships, was the third ship of the United States Navy named in honor of the 42nd state. Her keel was laid down on 14 June 1938 at the Philadelphia Navy Yard. She was launched on 1 June 1940, and commissioned at the Philadelphia Navy Yard on 15 May 1941, with Captain Howard H.J. Benson in command.

Washington has the distinction of having served the entire Pacific War without losing a man to hostile action, and only being hit once by enemy ordinance: a 5″ shell that passed through her radar antenna without detonation. There were some close calls, as she was exiting the Naval Battle of Guadalcanal, several Japanese “Long Lance” torpedoes detonated in her wake. Several Washington sailors died in minor accidents and she was involved in a collision with Indiana in 1943.

Washington is also one of two US modern battleships to fight in a battleship duel, which was the Second Naval Battle of Guadalcanal. The only other battleship versus battleship engagement of the entire Pacific Theatre was Leyte Gulf in 1944. Washington is also the only one of her contemporaries to sink an enemy battleship in warfare, Imperial Japan’s Kirishima; Massachusetts only disabled Jean Bart. 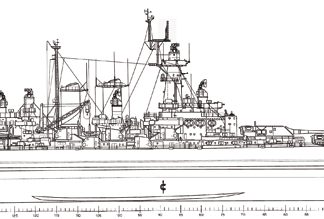